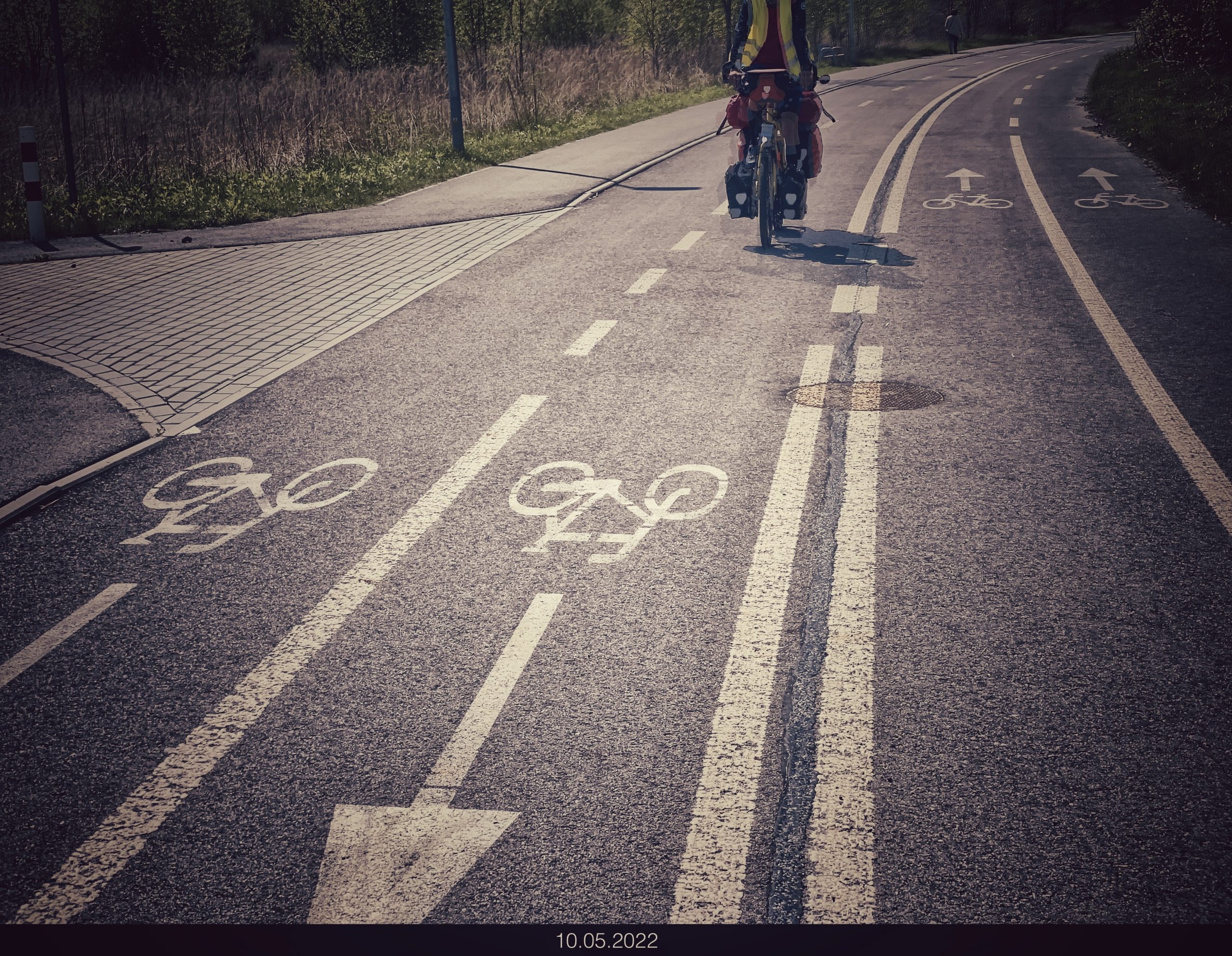 How nice to be full of prejudices…. and then not to have them confirmed.
We plan our routes with Komoot. Komoot is a route planner, navigation app, tour directory and social network for outdoor activities. It is mainly aimed at cyclists, hikers and racing cyclists.
And it finds wonderful routes. Mostly off the beaten path. Of course, that can sometimes lead to paths that we almost can’t negotiate with our luggage. Therefore, we prefer to plan the routes for racing cyclists. But even that is no guarantee.

Today, day 14, after more than 700 km and we had only max 10% routes that really stressed us. In general, cycling in Poland is so much better than expected and actually better than in Berlin. There is hardly honked and actually almost never pushed. In Wroclaw and Krakow, the bike paths are incredibly developed. Almost every one-way street is passable by cyclists in both directions. Most streets have a bike lane. And it almost seems that drivers have real “respect” for all other road users. First come the pedestrians, then the cyclists and only then the cars.

And we even found this one 🙂

Crosswalks are a real reason to stop here and usually car drivers do this meters before. Berlin, Berlin, maybe you should take a look at the bike concept in Poland 🙂

Cycling in Poland means for us so far kilometers long routes on small side roads, past green meadows, yellow rape fields and until now with blue sky and white clouds.

Maybe two more days in Poland. We might miss the cycling roads. Let’s see how it is in Slovakia and Hungary. Our next countries to cycle.

This website uses cookies to improve your experience while you navigate through the website. Out of these, the cookies that are categorized as necessary are stored on your browser as they are essential for the working of basic functionalities of the website. We also use third-party cookies that help us analyze and understand how you use this website. These cookies will be stored in your browser only with your consent. You also have the option to opt-out of these cookies. But opting out of some of these cookies may affect your browsing experience.
Necessary Always Enabled
Necessary cookies are absolutely essential for the website to function properly. These cookies ensure basic functionalities and security features of the website, anonymously.
Functional
Functional cookies help to perform certain functionalities like sharing the content of the website on social media platforms, collect feedbacks, and other third-party features.
Performance
Performance cookies are used to understand and analyze the key performance indexes of the website which helps in delivering a better user experience for the visitors.
Analytics
Analytical cookies are used to understand how visitors interact with the website. These cookies help provide information on metrics the number of visitors, bounce rate, traffic source, etc.
Advertisement
Advertisement cookies are used to provide visitors with relevant ads and marketing campaigns. These cookies track visitors across websites and collect information to provide customized ads.
Others
Other uncategorized cookies are those that are being analyzed and have not been classified into a category as yet.
SAVE & ACCEPT
error: Content is protected !!