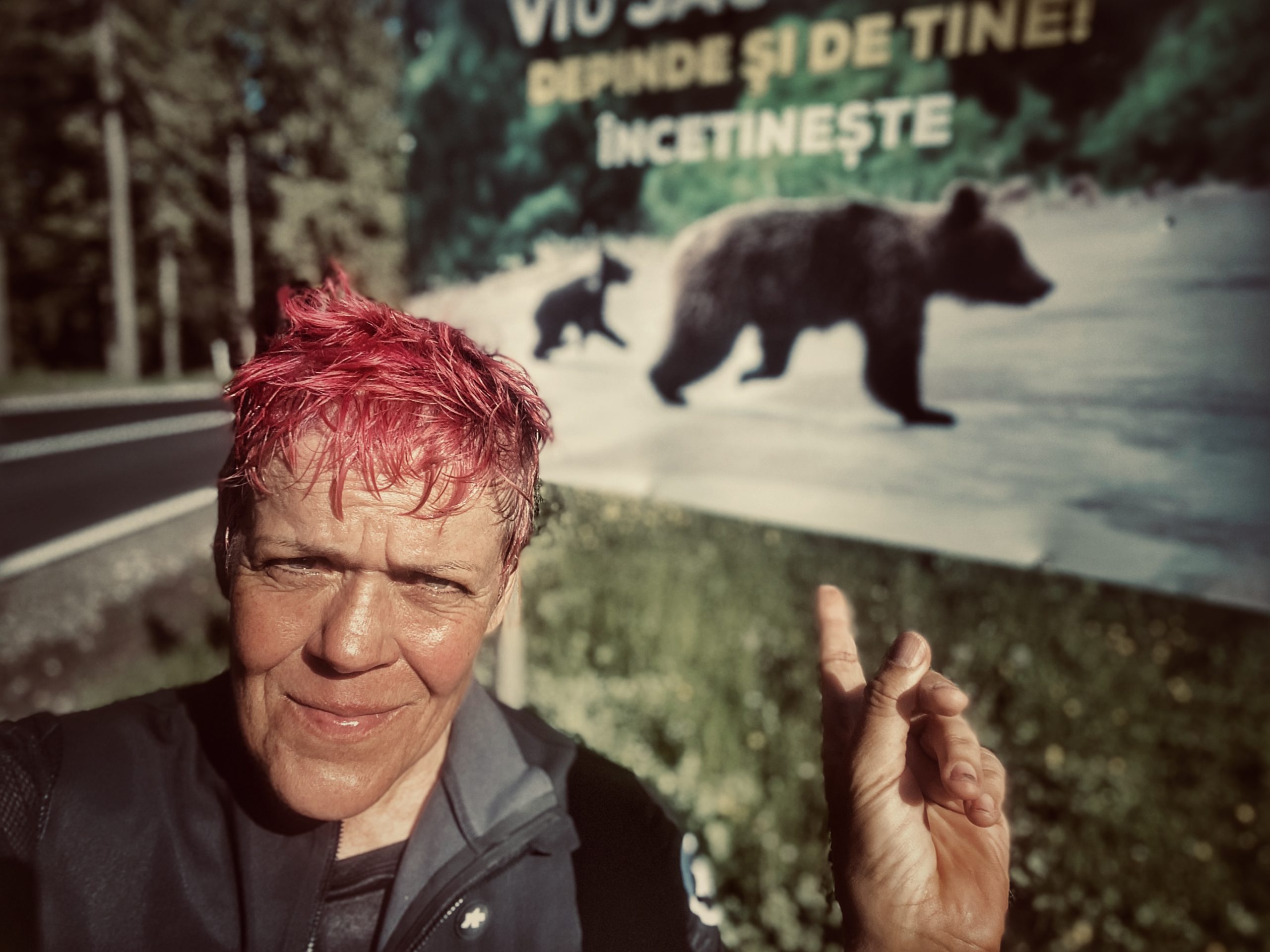 We knew that there would be high mountains in our way. We did not yet know about the motorway-like country roads and that we would take worse roads just to escape the trauma of the truck.
But of course, that’s exactly what led us over those roads and through those villages that were so different, so special, so pristine.

We could not yet take the highest and most picturesque mountain and its pass road, the Moldoveanu. At 2544m there is still snow in June and the road is still closed. Okay, we weren’t entirely unhappy about that. So we set off from Sighisoara towards Bucharest via Brasov. The highest point here was 1270m. All in all, we had to cope with an ascent of 2550m on the way. With some passages of 10% gradient. We were sweating and were very happy about a refreshment along the way.

What else we saw and experienced.

We ended up in the middle of nowhere in the Carpathian Mountains. Sheep, cows and dogs were the only living creatures (besides ants, mosquitoes and ticks, of course) that accompanied us.

There was no path for our heavy bikes. So we pushed, while the mud became more and more compacted between the tyres and the mudguards and at some point nothing worked anymore, we tried to keep calm. Fortunately, we had enough water with us. Metre by metre we continued and finally we simply pitched our tent somewhere in the meadow. Hoping that we were far enough away from the forest not to encounter any bears.

Then, at night, the horror.

A noise at the tent, a sniffing. With our headlamps we discovered glowing eyes about 20m away. It was a dog. He stayed and we heard him chasing away other dogs later that night. In the morning he wagged at us as we crawled out of the tent. He stayed for a while, we gave him our bacon, an egg and some cheese. Later he went to the sheep herd and did his job. Klaus called him Bernie.

The sun is now rising over the hills in the east.

As we cycle the Carpathian Mountains along, the villages pass us by. Wooden stables full of chickens, sheep and horses line up next to colourful houses. The ground on the farms is muddy and brown, the gates often painted in many colours. Occasionally, the landowners sit on chairs in front of their houses and watch the morning. I can hardly get enough of it. Now it is not a bad road that hinders our journey but this unknown splendour, which is why we keep stopping.

And of course the request for eggs stops us more often. A staple food for us at the moment. Most of the time I am not allowed to pay for them. They are given to us as presents most of the times. Just like we experienced in Hungary before.

This website uses cookies to improve your experience while you navigate through the website. Out of these, the cookies that are categorized as necessary are stored on your browser as they are essential for the working of basic functionalities of the website. We also use third-party cookies that help us analyze and understand how you use this website. These cookies will be stored in your browser only with your consent. You also have the option to opt-out of these cookies. But opting out of some of these cookies may affect your browsing experience.
Necessary Always Enabled
Necessary cookies are absolutely essential for the website to function properly. These cookies ensure basic functionalities and security features of the website, anonymously.
Functional
Functional cookies help to perform certain functionalities like sharing the content of the website on social media platforms, collect feedbacks, and other third-party features.
Performance
Performance cookies are used to understand and analyze the key performance indexes of the website which helps in delivering a better user experience for the visitors.
Analytics
Analytical cookies are used to understand how visitors interact with the website. These cookies help provide information on metrics the number of visitors, bounce rate, traffic source, etc.
Advertisement
Advertisement cookies are used to provide visitors with relevant ads and marketing campaigns. These cookies track visitors across websites and collect information to provide customized ads.
Others
Other uncategorized cookies are those that are being analyzed and have not been classified into a category as yet.
SAVE & ACCEPT
error: Content is protected !!