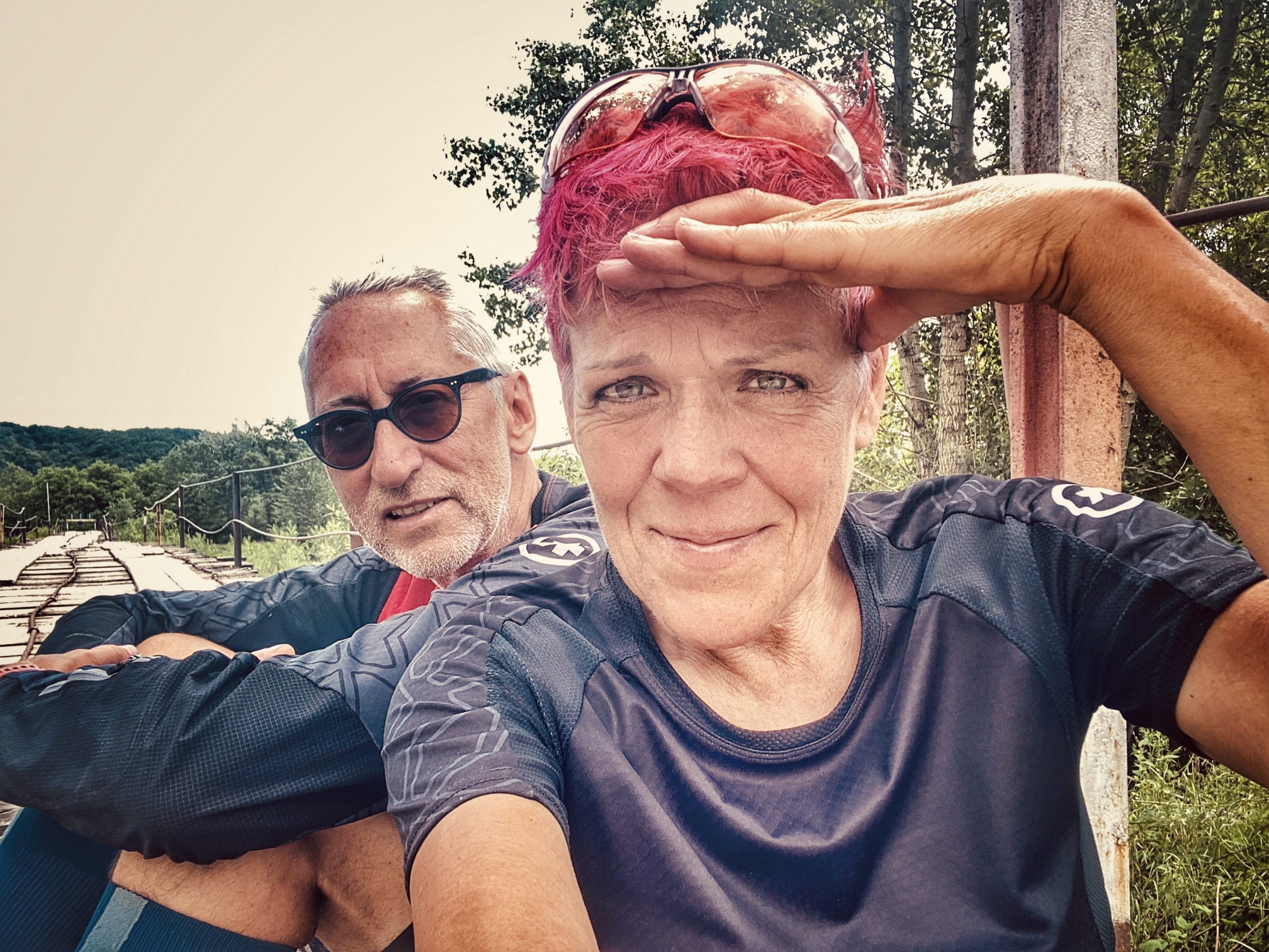 My personal „reckoning“ with Romania!

We travelled through the country for almost a month and saw many different landscapes, met so many wonderful people that we would like to talk about the country and our personal feelings a little more.
So much in advance: it was worth it. We finally reached the Black Sea and then cycled on to Bulgaria where we are now waiting to see if there is a ferry across the Black Sea to Georgia. If not, plan B starts: cycling along the coast of Turkey.

I am always tempted to compare new places with others I know. But I also try not to, and if I do, to be aware of it and check why. When I find something beautiful, I like to compare it to Italy, especially to the island of Elba. There, everything seems perfect to me (my first holiday with Klaus :-)). And if I find something awful, I also like to compare it with Elba and of course the place looks even more awful.
We compare all the time and that’s necessary, but it’s not conducive to breaking down prejudices, one of my wishes for our trip. A kind of location analysis helps me to recognise, but can be completely out of place for my evaluation, or settlement. Romania is not my country and the people have a completely different history. So why compare with Elba or any other place?

I won’t be able to stop comparing, but I can make an effort not to see Elba as a yardstick for me.

Above all, the comparisons I make are arbitrary and in my head I think to myself that everyone else is using the same yardsticks and comparing. Wrong! They are only my yardsticks.

Reckoning with he trucks!

There were the trucks, for example, which almost always came far too close to us and thus developed no empathy whatsoever for us as cyclists.

Klaus wondered how I can swear. But when I shout loudly, I lose my fear a little.
Yes, they don’t have any highways in Romania, so the „European roads“ are the highways and we have no business there.
Why should anyone find that reprehensible who doesn’t travel by bicycle. For me personally, this was the end of happiness and the beginning of discontent in Romania. We were scared.

Since there was nothing we could do about the madness on the roads, we changed our route, which occasionally brought the bikes to an almost complete standstill. Mud got stuck between the tyres and the mudguards and it was difficult to make progress. Roads sometimes ended in the middle of nowhere or in meadows without notice or were no longer passable, heavy rains had completely devastated them. But now at least we were without trucks.

Reckoning with the romanian people!

I want to appreciate this country and its people.
I want to understand.

Some survey between 1999 and 2001 once showed that Romanians are among the unhappiest people in the world. Even more unhappy than Russians and Armenians, it was pointed out. Okay, just one survey.
I imagine I can read the hard life during the Ceausescu era (we met and talked with a gentleman who was in prison under Ceausescu, an artist, a dissenter, an “enemy“),  the disappointment about the turnaround, which brought no improvement for many, and the exhausting struggle for one’s own existence in the faces. It is a hard trait to recognise a very serious attitude in many. I am quick to interpret this as “unfriendliness”.
A few look up briefly with a deadpan expression as we pass, but quickly avert their eyes when you look at them. Rarely do you get a smile.
If you come into closer contact with the people, the cool distance usually gives way after a short time to a very friendly, courteous attitude.
The bacon, the eggs, the water, the onions, the chocolate, the honey and the ice cream. We have been given gifts. Just because. Because we were where they were, these warm-hearted people.

Unfortunately, we don’t speak the language and those who communicate with us in English seem to be the sceptics and pessimists: “We don’t have democracy, we have pure interest politics.” Or a young man working in Freiburg says about his country: “Romania is bad”. That’s all he had to say about it.
But we also met Hans. An activist on environmental issues in his country and he came back from Germany, his parents fled communism to Bavaria. He has his roots here and wants to move his country forward.

Note to myself: Reckoning with myself. I need to learn languages!

All in all, Roman ancestry seems to be the great pride of the Romanians, of Bucharest. The Slavic influence is great, but they still prefer to be a “Latin island in a Slavic sea”.

They turn up their noses at the architecture from communist times, preferring to hear “Bucharest, the Paris of the East” for the Romanian capital.

Rigorous and full of national pride!

The benches in front of the doors, the equipment in the playgrounds, everything in the national colours. The streets are lined with flags.
A campmate at a wild campsite has stuck a flag in the sand in front of the tent.

Do Romanians compare themselves too much? Do they look too far to the West? Coca Cola, Pepsi and Mc Donald can now be read in huge lettering on the “communist” buildings.

Without consideration, but probably without malicious intent!

For me, Romania is most beautiful and nicest in the rural areas. We can see the hard life of the people, but they seem to be happy and content.

Some have come to financial wealth and believe that the even fatter car will make them happy, yet somehow they are completely overwhelmed by this horsepower.
Women stick their heads up behind the windscreens. After all, they are much too small to manoeuvre through the narrow penalties of the big city.
The country roads are lined with crosses, but our empathy is limited. They simply drive far too fast and without consideration, but probably without malicious intent. And by the way, today’s engines can tolerate being switched off, even if you only stop briefly at the bakery.

And then again and again these poverty-stricken Roma settlements.
Whether in the cities or in the countryside. Why do people in Europe “have” to live like this?
Roma were slaves in Wallachia and Moldova until around 1855. Whether the government is failing or the Roma themselves are too attached to their structures, too suspicious of state aid, probably a bit of both. But whatever the reasons, when you see these children in this misery, I ask myself: where is Europe here? Where is the empathy?

We take part in a great city tour with bicycles in Bucharest and get a feeling of this country. And when our guide says “we are on the right track”, I have this feeling of “future” for the first time. For him, these oversized cars are ridiculous, he proudly talks about the Roma living in the city, about its history, is happy about the gigantic communist buildings, talks about corruption and about the future. Defends the speeding trucks and worries about the suffering dogs in his country.

And that brings me to my final reckoning.

Have you gone crazy? Do you think these are cheap alarm systems? We cycle passing chain dogs on farms all day. Some bark aggressively, others stand around resignedly. Chains too tight around their necks in their own filth. How can you not see and feel that this can’t be right?
We are “accompanied” by the permanent fear of the “wild” dogs that chase us barking and snarling.
We irritate them with our “stomping”. Cars? No problem

So we change our strategy again. When we see dogs, we slow down and often even get off. Klaus then yells something, doesn’t matter what but that helps, most of the time. Otherwise there is the hint that you throw a stone and they turn back. So it’s hard for us to feel empathy here as well. Look at that.
But anyway, we loaded up on some extra dog food and hand it out to cats and dogs we come across. Only a very tiny happy moment for those animals but at least it is one.

This reckoning is unfair, I know!

I know, it is a little unfair to talk in such a way about the Romanians, to do this reckoning. If I could speak and understand the language, a lot of things would have felt very different probably.
A reason to come back and look at the country again. Looking back, it really does feel like “they are on the right track”. It just takes a bit more time and I can’t compare. Romania’s history is not mine. And I am grateful that we were allowed to get such an insight into the country.

Some small tips for bicycle travelers:

– The Profi Market.  Super selection, cheap, to be found in almost every place and always with free WiFi.

– You can ask for eggs on every farm for a little “change”.

– Wild camping is allowed in Romania. Of course, you still have to ask on private property. We have never been refused.

– Plan for a longer cycling ride with less kilometers so you can enjoy the most beautiful roads with stunning scenic views. But… avoid the “European Streets”

– In Romania, you can shop in most places from Monday to Sunday.